While the nation will be cheering for cherries this weekend. Or cherry pie, at least. That’s coming up on This Land of Ours.

From Wikipedia, the free encyclopedia

Cherry pie is a pie baked with a cherry filling. Traditionally, cherry pie is made with tart rather than sweet cherries. Morello cherries are one of the most common kinds of cherry used, but other varieties such as the black cherry may also be used.

Cherry pie is associated with North America, Donauwelle in Germany and Austria. It is a very popular treat in North America and prior to the advent of refrigeration it was most commonly eaten in midsummer (harvest of cherries in North America coincides with Canada Day on July 1 and America’s Independence Day on July 4.)

Cherry pie is often eaten with whipped cream or ice cream. A common preparation tradition in the United States is to decorate the crust with ornate pastry patterns. 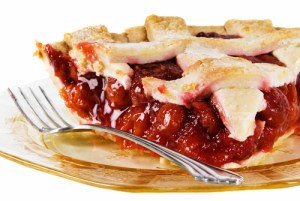 Observed annually on February 20th, it is National Cherry Pie Day.  This is a day for all cherry pie lovers to eat their favorite pie for breakfast, lunch and/or dinner.

According to the American Pie Council, pie came to America with the first English settlers.  The early colonists cooked their pies in long narrow pans calling them “coffyns” like the crust in England.  As in the Roman times, the early American pie crusts often were not eaten, but simply designed to hold the filling during baking.  It was during the American Revolution that the term crust was used instead of “coffyn”.

In the United States, cherry pie is often referred to as a “great American dish”.  Recipe books have many different versions of recipes for cherry pie.

Try making your own cherry pie using one of these delicious recipes:

Not much of a baker?  Stop by your favorite bakery or take friend out for a slice of cherry pie and cup of coffee.

Check out more of Cathy Isom’s features on “This Land of Ours” here.